Comic Book Storytelling has returned… again. This time we are taking another look at Marvel’s Gwenpool… again. Gwenpool’s series has come to an end for now but this will probably not be the last of the character. 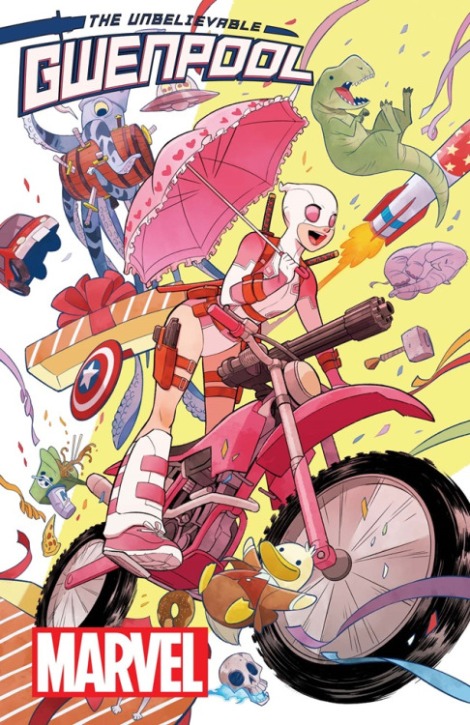 For those of you who need to be reminded Gwenpool basically started out as a joke during a series of covers of What If Gwen Stacey were a bunch of other Marvel characters including Deadpool. Gwenpool proved to be more popular than all of the others so soon she was making appearances in back up stories with Howard the Duck and then she had her own series.  She even has a Marvel Legends action figure now. At first we did not really know where Gwenpool came from.  She appeared to be a fangirl who was transported to the Marvel Universe after that whole collapsing of the multiverse into Battleworld thing. In order to survive in a comic book world she was determined to become a main character. But there were still a lot of questions about her origin that were hinted at for a long time before being explained. Gwen Poole came from a mostly mundane reality where Marvel characters are fiction but it also happened to have super science devices that can send you to other worlds. So Gwen was just another disaffected millenial who decided to use super science to find a better life. I thought there was going to be something more tragic in her backstory but this works too.

Eventually her brother came looking for her, and she tried to kill Doctor Doom even though he is sort of good now, and she met an evil future version of herself who wears pants instead of going bared legged. I feel like I should take the time to talk about the costume one more time. Yes Gwenpool leotard like costume has exposed legs and that is not practical in real world combat. But comic book worlds are different. If you are going to make a joke about the silliness of a costume I think you get one joke and then you need to just let it be. Either that or actually change the costume to be more practical.

As the series was nearing its end Gwen was aware it was coming and was worried she would cease to exist after the final issue. But in that final issue she meets her good future self who looks just like her but with slightly longer hair. Future Gwenpool shows younger Gwenpool that it may look like the end from the outside that does not mean it really is. And thus the final issues it filled with flash forwards to future events. Gwenpool’s ghost friend Cecil finally gets to be alive again, she saves her brother from Hell, she even teams up with Spider-Gwen. And so Gwenpool is able to give herself a lifetime worth of adventures even though this series has ended.

I am sure that Gwenpool will show up in the Marvel Universe again someday. Maybe she will join one of the many Avengers teams or team up with some other teen heroes again.  Until we meet again Gwenpool.