Are you ready?  ARE YOU READY FOR ANOTHER UNBOXING VIDEO?  And yes, my cat does show up.  You can’t stop her.  But if you’re here for photos, fear not!  There’s a more in-depth look coming after the video, folks.  So sit down, strap in, and enjoy! Oh, and a human walks in partway through, too. Does anyone wanna fork over a few thousand dollars so I can set up an actual studio for my once-in-a-blue-moon video reviews? It would, um… be a gift.

Anyway, Wee Warriors are a new line of blind-packed mini figures from Oriental Trading Company, a mail-order site. You buy them in bulk, and they’re not super-expensive…. but keep in mind that shipping won’t be too cheap. There are twelve figures in the line, two to a blind pack, and two full sets per case. Each two-pack has identical contents, and matching packs are next to each other in the case. Be aware of that! 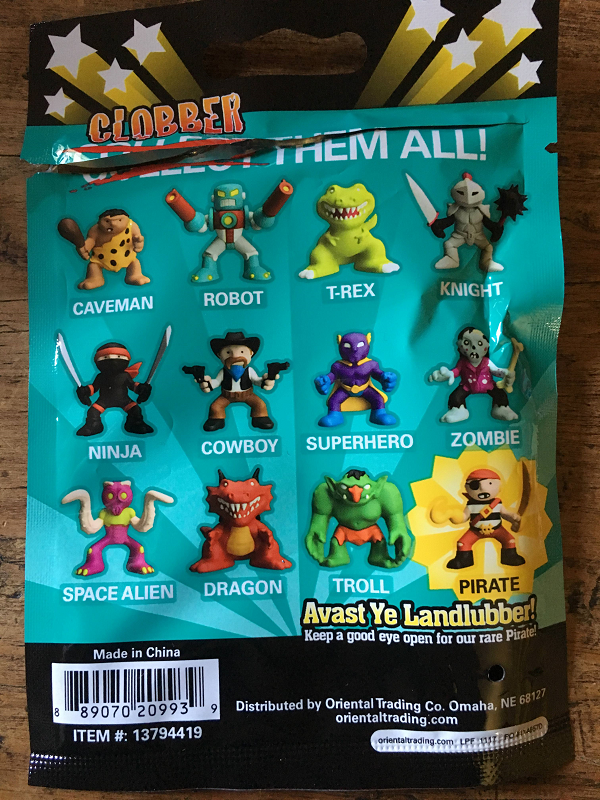 Don’t worry about the pirate being “Rare.” That is a lie. A lie from the Pit. But anyway, let’s look at these guys. And here he is. The “rare” pirate. He seems to have some trouble with his teeth. The Space Alien has flesh-colored tentacles. That just seems gross for some reason. I stand by my statement that the Caveman is the deranged love child between Fred Flinstone and Ernie from Sesame Street. The T. Rex is a little chunky and awkward, but he is also a dinosaur, which makes up for many wrongs. The Knight is dual-wielding, and looks surprisingly like Puke Knight from OMFG Series 2. His buddy the Dragon is pretty similar to the T. Rex in a lot of ways, only red and with wings. The Cowboy has brought guns to what I assume is a street fight. The Troll is one of my favorites, and do yourselves a favor – look up Three Hearts And Three Lions, by Poul Anderson. I really hope that the Ninja’s tiny eyes are due to sloppy paint, and not racism. The Super Hero is totally not Batman or Black Panther. Not at all, nuh-uh. The robot appears to have E-Cigs for hands, making him popular with the hipster crowd. And finally, we have the faaaaabulous zombie, who dresses like he’s either from Miami or New Jersey. Poor guy’s fashion sense was so bad that he became undead. Well, there you go! Without factoring in shipping, these end up about 50 cents per figure – and even with shipping, they’re pretty cheap. The individual figure uality may be dodgey, but it’s fitting for the price. To be honest, the humans are rather bland with these guys, but thre are some standouts, like the Troll or Space Alien. If you like minifigures, they’re worth a try – and hey, you could even pick up some blind bags to hand out to kids this Halloween!