Comic Book Storytelling has returned. Today we are going to be looking at the latest issue of DC comics Doomsday Clock mini series. I will also have some things to say about the end of Heroes in Crisis.

Doomsday Clock 10 gives us a look at what has been happening to the DC Universe from the perspective of Dr Manhattan.

After the events of Watchmen, Dr Manhattan popped off into the multiverse and ended up in the DC universe. The first person he met was an actor named Carver Colman, the same actor who stars in the movies playing in the background of one of the series subplots. A number of elements from earlier issues start to become relevant.

When Dr Manhattan first arrived his ability to see across his own timeline was disrupted. He focused on Carver as a way to adjust to the flow of time in the DC universe. Manhattan became a fixture in Carver’s life as his film career got going and up to the moment of his death.

But its after visiting the location of Superman’s first appearance that Dr Manhattan notices something is off. One moment Superman first appeared in 1938 and in the next no one has heard of him at all. Manhattan observes several instances of Superman’s origin replaying at different points in the timeline and those changes echoing across the multiverse. It seems the Superman Theory subplot from previous issues has some basis in reality. The multiverse keeps shifting around changes in Superman’s personal timeline. Out of curiosity Dr Manhattan starts experimenting. He begins actively making changes to what he calls the metaverse and observes how Superman changes with it. But eventually the heroes of the DC universe notice what he is up to and Dr Manhattan finds there are consequences for his actions. The problem becomes clear with another look at Carver Colman.

Carver was the first person Dr Manhattan interacted with in the DC Universe. He used the actor as a constant to help him get a grip on the DC timestream. Over a period of sixteen years Manhattan has several conversations with Carver in the same diner. Until the night that Carver is murdered. Dr Manhattan is there the night Carver dies and takes no action to prevent it. At several points in Watchmen Dr Manhattan had opportunities to to stop violence from occurring but did nothing. Dr Manhattan is a being of inaction. He took action to change the DC timeline, not out of malice but out of curiosity. And now this universe of people who take action all the time have noticed him and are reacting against him. Superman is the greatest man of action the DC universe has. From the point of view of the DC heroes Dr Manhattan is a villain. They don’t understand his motives but he has changed their lives in ways they are not even aware of and did not consent to. And now Dr Manhattan has nothing waiting for him but an ending.

This was a really good issue and puts a lot of past material into better context. But its not great that the first truly compelling issue of a 12 part mini series was number 10. 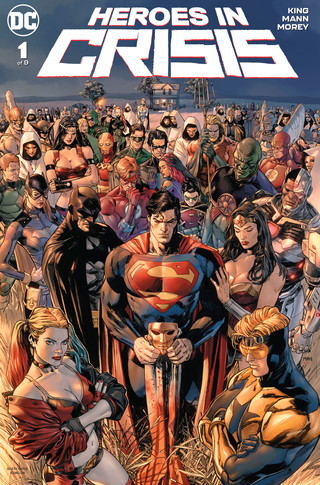 Okay now lets have one last word on Heroes in Crisis. First of all it is over. It started after Doomsday Clock and is ending before it. So there is that.

I have heard a few people say that Heroes in Crisis does have some redeeming moments where the characters try to be there for each other in the midst of all the violence and trauma occurring. And that is good but I don’t think it is not enough to redeem all the ways this story has failed. In the final issue the other heroes get through to Wally West and prevent him from committing time travel suicide but he still gets arrested because people are still dead.

I’ve said it before that I never trusted DC to handle issues of trauma and mental illness with any dignity. From the very first issue I did not buy that this series would have anything worthwhile to say so I did not give my money to it. And it looks like I was right.

The Sanctuary is basically a big plot device to serve the murder mystery. The creepy masks and robes the patients are forced to wear seem like an incredibly poor choice. The holographic rooms that recreate moments of trauma are a terrible idea. That is not how therapy works. And since when is it even possible for speed force users to lose control of their powers and kill people. The speed force does not work that way.

And why did Sanctuary even have to be a secret in the first place? Why is there a scandal when people learn about it? Why would heroes getting therapy destroy the public’s trust in them? This is never explained or justified. It just happens.

Okay this is going on longer than I planned. Heroes in Crisis may have had its moments and some readers may find them worth dealing with all the nonsensical plot holes. I did not think it was worth it. I will give on last shout out to Clay Mann’s art, it was about the only redeeming thing I could find in this series.