I was going to write an update while House of X and Powers of X were coming out but decided to wait until they finished before talking about them again. Well both series have reached their end and there is plenty to say. First a quick recap of went happened at the start.

In the series we learn that Moira MacTaggert was always a mutant with the power to be reborn every time she dies effectively creating a new timeline with each life. She has lived through several versions of history where mutantkind tried and failed over and over again to survive.

In the current timeline Professor X and Magneto have teamed up to create an independent mutant nation on the island of Krakoa. They are inviting and granting amnesty to any and all mutants and it looks like everyone is taking them up on that offer.

We also see two future times the Year of X 100 and Year of X 1000 where things are not going well. In the Year 100 era genetically engineered mutants are struggling to survive against a world ruled by sentinels. In the Year 1000 ear mutants at first appear to be gone and humans and AI have evolved far beyond them.

We later learn that these two future eras are not part of the main Marvel timeline. The Year of X 100 takes place in the timeline where Moira teamed up with Apocalypse. In that life she decided to try full on war to save mutants. With Apocalypse leading the mutants endure a seemingly endless conflict with the sentinels lead by Nimrod. This version of Nimrod seems to hate humans as much as mutants and takes every opportunity to abuse and oppress them. The Year 100 story ends when they make one final attack to steal data on how Nimrod class sentinels were created. Moira then dies taking this knowledge to her next life.

In the pages of House of X the X-Men go on a mission to destroy the space station where Nimrod will one day come into existence. The mission succeeds but all the X-Men on it die. But then they get to come back to life. That scene from the beginning of the series with Professor X standing in front of people emerging from tree pods meant something after all. Several mutants with unrelated powers are able to work together to create new bodies and then the Professor uses cerebro to restore their psychically backed up minds. I did not believe any of the X-Men killed off panel would stay dead but I was not expecting this. I was also not expecting the cult like ritual that follows the resurrection process. 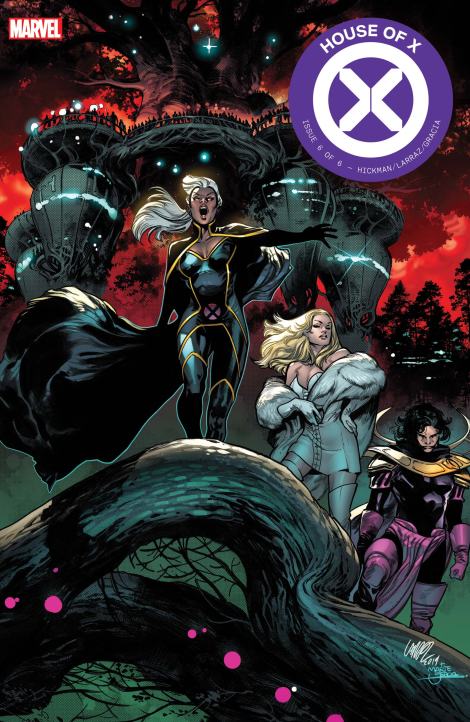 For most of these two mini series I feel like I was constantly waiting for the plot to start. There were a lot of big science fiction ideas being floated around but very little in the way of character action or conflict. Sure they went on the mission to stop the sentinel factory but that seemed more like a subplot than part of the main story.

On the island of Krakoa we get a look at this new mutant nation but little real story. It is not until House of X 6 that the mutants finally have to deal with some tension. They have their first gathering of what will be the ruling council and one of their first actions is to judge Sabertooth for those murders he committed a few issues back. They were able to regain custody of him after he was arrested and now he faces the new mutant justice system. He is guilty but they don’t believe in execution so he gets absorbed by Krakoa and will go into stasis forever. Then everyone has a party.

On the one hand they paint a picture of everyone loving it on Krakoa and having a great time. On the other hand there is no way there will no be internal conflict later. There have been many instance of individual or even groups of mutants willing to sell out the rest of their kind. For now they have some security but these are ongoing comic books series so somethings is going to happen eventually.

Finally things wrap up in Powers of X 6. It is here we learn what is up with the Year of X 1000 story. So the future evolved humans made contact with the Phalanx, a super advanced techno life collective. Basically they want to be absorbed by the Phalanx and become part of their cosmic god like being collective. In issue 6 we learn that there is a preserve where the last living mutants are kept. Both Wolverine and Moira are still alive there. It turns out this takes place in yet another past timeline of one of Moira’s lives. In this timeline the sentinels were basically just a distraction so human could artificially evolve through genetic engineering and technology. It did not matter how adaptable mutants were if humans could make themselves something more advanced with science. But now some of these artificially evolved humans might be having second thoughts about getting devoured by the Phalanx. Anyway Moira dies again and thus carries the knowledge of this possible future with her to other timelines.

This series sets up a new status quo for the X-Men, one where they are basically embracing total segregation. I can’t begin getting into the problematic implications of that. Then again the X-Men and mutants as allegory for real world oppressed groups has always been problematic and only made more so when you consider that they have always almost exclusively been written by white men. This series feels like it really wants to set up a hopeful new era for the X-Men but there are a lot of terrible implications in this story if you start to think about them.

Anyway here is a nice Savage Land combo alternate cover, it did give us some decent art to look at.